Founded in 1982 as the Adelaide Road Homeless Families Project to help 28 local families, Doorstep was renamed in 1989 when it moved to its present location in the basement of one of Camden’s largest hostels for homeless families. The name Doorstep was chosen to reflect the project’s accessibility to families living in temporary accommodation in the area. 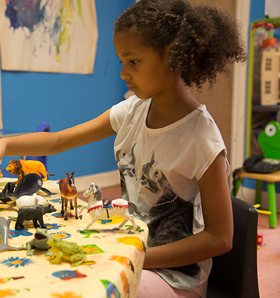 When we hear the word homeless we think of someone living on the street. The families we work with have shelter but living conditions are difficult. A single mother with a child living and sleeping in one room which includes cooking facilities. A child with as little as 6 feet by four feet of floor space to play. A large family of two parents and four children living in one room with cooking facilities and a second room in which all of them sleep, with all their beds lined up and no space between. Some of the families with two rooms have a communal corridor running between the rooms. There is very little space and very little privacy. The families are living on extremely low incomes, often isolated, cut off from family and support networks. They may have fled violence and experIenced trauma. Children’s education is disrupted and parents feel their lives are on hold.

Why Doorstep Needs Your Help 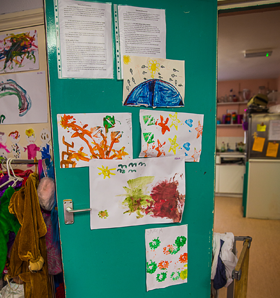 From April 2014, we lost 100% of the core funding previously received from Camden Council for more than 20 years, due to the huge savings they have to make.

So this is it! We have to raise every penny we need in order to keep going.We have survived the first year of total financial independence thanks to the support we have received.  One of our funders last year gave the following feedback to an application:

Doorstep  “was received positively by the Land Securities Panel and they were particularly impressed with what the organisation has achieved so far considering the huge funding cuts incurred. The Panel saw many possibilities to work together in the future and also recognised that such a project addresses real need by working with very vulnerable families”.

Although, we have had considerable success with funding applications, raising money is getting tougher. We are surviving year by year but still need to achieve longer term security and to increase the staff resources. It’s rather like finding the pieces of a jigsaw puzzle to complete the picture of Doorstep, now and for the future

Doorstep is a Company Limited by Guarantee, Registered in England and Wales, No.2476922. Registered Charity No. 1007692. Doorstep is Funded by charitable grants and private donations.