You are here: Home / community

Record numbers of families are becoming homeless after being evicted by private landlords and finding themselves unable to afford a suitable alternative place to live, government figures show.

The end of an assured shorthold tenancy (AST) was cited by nearly a third of the 15,170 households in England who were classed as homeless in the three months to June – a number that was up 10% on the same period last year.

The problem was particularly acute in London, accounting for 41% of all homelessness acceptances in the capital during the period, according to figures from the Department for Communities and Local Government (DCLG).

The end of an AST has rapidly become the single biggest cause of homelessness in recent years, triggered by spiralling rent rises and cuts to housing benefit support. In 2010 just 11% of homeless acceptances in England were caused by the end of an AST.The government’s statistical release states: “Affordability [of housing] is an increasingly significant issue, as more households facing the end of a private tenancy are unable to find an alternative without assistance.”

Bob Blackman, a Tory backbencher who has drawn up a private member’s bill seeking to require councils to do more to help households at risk of losing their homes, said: “It is a national disgrace when we have the highest number of people in employment ever, we have a low rate of unemployment, that we still have people sleeping rough. Goodness knows what will happen if there is a recession.”

He said the government was “very sympathetic” towards his bill, which will have its second reading in the Commons at the end of October, and he was negotiating with ministers to get proper support. “I think it sits with Theresa May’s social agenda so that everyone benefits from the economic situation of the country, which is very positive,” he said.

The quarterly statistics also reveal a sharp rise in the number of homeless households with children who had been unlawfully resident in unsuitable temporary bed and breakfast accommodation for longer than six weeks.

Although councils are required to ensure families do not stay in B&B accommodation for longer than 42 days, 1,140 households found themselves in this position in the three months to June, up 29% on the same period in 2015 and the highest recorded number since 2003.

Outer London boroughs in London such as Croydon (169), Redbridge (132) and Harrow (120) recorded the highest number of households in breach of the six-week limit, and there are signs the phenomenon is spreading beyond the capital, to places such as Luton (87), Reading (65) and Peterborough (30).Local authorities have blamed use of B&Bs on chronic shortages of affordable suitable temporary housing in their areas, a shortage caused in part by government cuts to housing benefit levels.

The figures show that 73,120 households were in temporary accommodation, up 9% on a year earlier, and nearly three-quarters (52,820) were in London.

The homelessness charity Crisis called on MPs to support Blackman’s bill, which has cross-party support. Its chief executive, Jon Sparkes, said: “It isn’t enough to help people at crisis point. We need to prevent them from losing their home in the first place.”

“We need a change in the law to prevent more people from losing their home and to make sure all homeless people can get the help they need, while councils need the funding to make this work. Prevention has already been shown to work in Wales, where it has dramatically reduced the need for people to be rehoused.”

Martin Tett, the housing spokesman for the Local Government Association, said: “Councils want to help everyone at risk of homelessness and support those who are homeless into accommodation as soon as possible. Faced with significant cuts to their budgets, falling social housing availability and welfare reforms, it is clear councils cannot tackle this challenge alone.”

Campbell Robb, chief executive of the housing charity Shelter, said: “These figures are a heartbreaking reminder of the devastating impact our drastic shortage of affordable homes is having. Every day at Shelter we hear from families struggling to keep their heads above water when faced with the double blow of welfare cuts and expensive, unstable private renting, with far too many ultimately losing the battle to stay in their home.”

A DCLG spokesman said: “This government is committed to supporting the most vulnerable in our society and ensuring our country works for everyone, not just the privileged few.

“Statutory homelessness remains less than half the 2003-04 peak and we are investing over £500m to both tackle homelessness and prevent it happening in the first place.” We are grateful for London Community Foundation‘s recent feature on Doorstep, helping to draw attention to our cause and work.

There are thousands of homeless families across London stuck in unsuitable hostel accommodation. Neil Baker visits a charity that supports them, and hears how one mother is fighting for a better life – for herself and her young son

Tanya is waiting for the phone call that she hopes will change her life. A single mother with a two-year-old son, she’s spent the last nine months living in a hostel for homeless families. There’s no space for her boy, Omran, to play and barely any privacy.

“We sit, eat and sleep in our bed,” she says. “In the summer there are places to go, but if you go to the park for three hours, what do you do for the rest of the day? When we get back to the hostel, Omran shrinks into the buggy and cries.”

The strain of living in such cramped accommodation is taking its toll. Tanya looks smart in her dark trousers, green and cream sweater, black hair tied back. But she speaks in a whisper and spends much of our time together with her head in her hands.

She’s desperate to find a safe, permanent home for Omran. Last month her dream came true. Camden Council found a private landlord willing to rent a flat to a tenant on housing benefit. Moving day is next week.

But two days ago the dream turned sour. Tanya heard that the landlord still hadn’t signed the contract. Now he isn’t answering his phone. And her housing officer is off sick.

The council says it should all be fine, but they’ve told Tanya to have a plan B, just in case. “I don’t have a plan B,” she cries. “If this falls through, I don’t know where we will stand.”

Lifeline on the doorstep

Tanya is telling her story in the crèche at Doorstep Homeless Families, a shoestring charity that’s a lifeline for people like Omran and herself.

It offers after-school clubs, back-to-work training, free toys and healthy meals from the basement of the Abbots and Levine Hostel, one of the biggest in Camden. (Hence the name; it’s literally on the doorstep of the homeless families it serves.)

Many of the 45 families living on the four floors above have just one room. Others get two, but with a communal corridor running between them. People often feel isolated, cut off from family and support networks. They may have fled violence and experienced trauma.

Vicky Fox runs Doorstep, and has worked here for 25 years. She’s the only full-time staffer. Christmas is two weeks away. Today there are two parties for children and their families; sacks of presents to wrap; food hampers to distribute. Her cramped office has a desk, a sink, mountains of paperwork and Post-it notes everywhere. “It’s a huge workload,” she says.

Fundraising is a growing part of the job. Camden provided the core funding for 20 years. But in 2014 they cut 100% of their grant. “It was a blow,” says Vicky.

“Doorstep has been a rock for me these last nine months,” says Tanya. Here Omran can be a normal, smiley kid. With his black hair cut short, in a dinosaur t-shirt, he’s happy playing trains and cars on the floor with another boy his age. He’s oblivious to his mum’s tears, as she explains how they became homeless.

Born in northern Iraq, Tanya grew up in Baghdad. Her father was a doctor. They fled the country when he was detained and tortured by the regime. With the help of the United Nations, they made it to London in 2001, as refugees with indefinite leave to remain.

From very little, Tanya built a good enough life for herself: a rented three-bedroom flat, a car, some savings in the bank. She’s an educated woman with two university degrees. When her father had a stroke, Tanya was his sole carer until he died. She then met a man, married him within a year, and had a baby.

Her husband decided they would live in Germany, where he had family and work would be easier to find. But when they arrived he just sat on the sofa all day playing computer games, says Tanya. Once her savings were all gone, he abandoned her.

Eventually, she made it back to London, arriving at St Pancras train station with one suitcase, Omran in his buggy and nowhere to sleep that night. Tanya went to Camden town hall and declared herself homeless.

“I know there’s no shame in living on benefits, but it’s not me,” she says, when she’s finished sharing her story. “It’s not what I want. I’m used to being busy, to working. I just want to be independent again.”

The phone call she’s desperately waiting for isn’t just about getting a proper home; it’s the first step away from this life and back towards normality. The thought that it might fall through is almost too much to bear. She’s taking medication for depression, and was considered a suicide risk. Vicky has been watching her closely.

“I want to know what is happening, but I can’t keep calling the council. It’s embarrassing,” Tanya says. “I can’t go back to square one again.”

Omran’s crying interrupts us. Another child has banged him on the head with a toy. He comes to Tanya for a cuddle. “Ah, mummy, mummy, mummy,” she says, embracing him in a long hug, kissing the top of his head, again and again.

Now the morning play session has finished. Tanya’s phone hasn’t rung. We wish her good luck as she climbs the stairs to street level. She’s off to find another way to pass the time, before it gets too dark or too cold and they have to return to the hostel.

Christmas comes and goes. Did the landlord sign the contract? Are they still stuck in that single hostel room? There’s no news about Tanya.

And then on January 11 an email arrives. “I just saw Tanya,” writes Vicky. “She is positively radiant with happiness! I’ve seen pictures of her flat and it really is lovely!”

Doorstep Homeless Families Project is funded by the London Community Foundation. There’s more information about the project here: http://www.doorsteplondon.org Some of the names in this story have been changed to respect privacy. Professor Green sets out to discover the modern face of homelessness,changing our perceptions 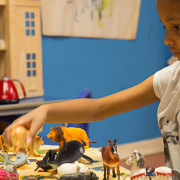